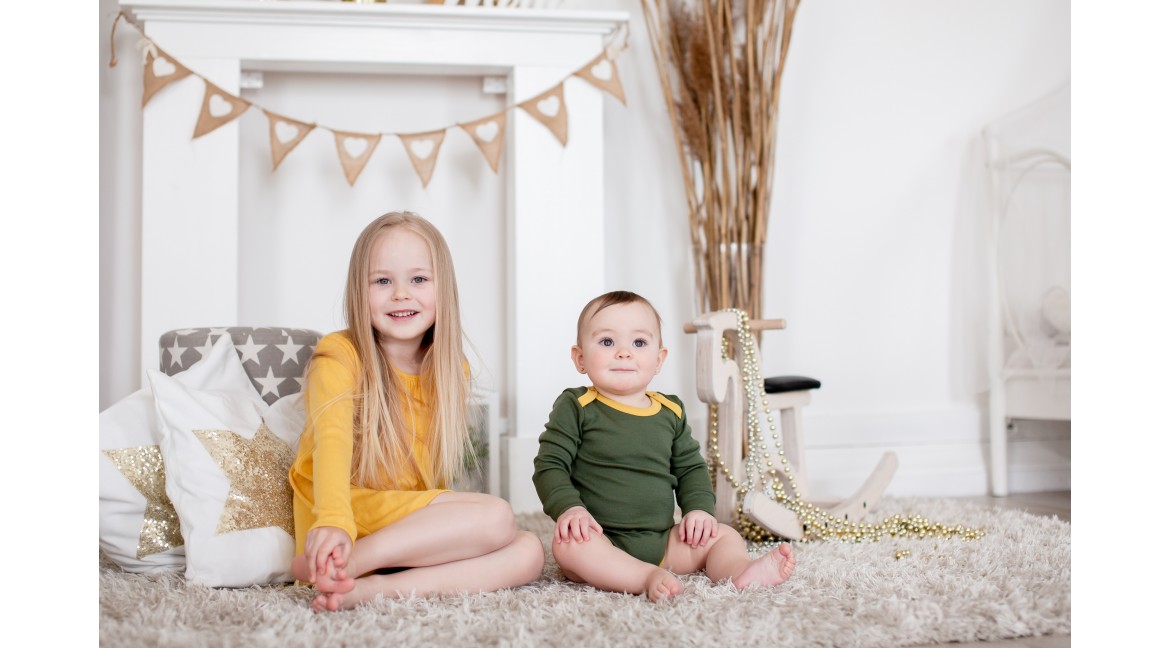 Once in a while, we – the team at GREEN ROSE – are so amazed by the wonderful letters we receive from our clients that we can’t wait to go back and read them again. The positivity and attention to detail contained in much of your feedback inspire us to keep plugging away on your behalf by looking for new colours and working on fresh merino wool clothing designs for the next season. Here we would like to share one such letter received from Inga, a mother of three, which we called – Wool Clothing for Children.

Health = Wealth for the Whole Family

'I always thought I would have two children – right in line with the statistically typical Lithuanian family. And yet, buried deep in my subconscious, was a dream of being blessed with a second little miracle. You know what they say, though – be careful what you wish for! Fast forward to today, and we’re a much larger family now, comprised of – apart from me and my husband – the twelve-year-old Faustas, the six-year-old Jorė, and the nine-month-old little pumpkin Motiejus.

I used to joke (or perhaps I was actually serious when I said it) that I could carry, give birth to, and then raise fifteen children if someone assure me that they won’t get sick. As you can probably tell, I’m really scared of illnesses. And if there’s something you’re afraid of – that’s exactly what’s coming for you, it seems.

My oldest one started to get sick all the time and could only go to kindergarten for one week out of every four (one week at the kindergarten and three at home convalescing). Now, 12 years since the birth of my first child, I recognise so many things I used to do wrong. And the first item on that list is CLOTHING!'

'Truth be told, the first item on the above list would actually be thoughts which become reality. Every time my child would get over an illness, I’d be nearly certain it would soon come back. And surely enough – it would. I don’t do that anymore, though. Instead, whenever people around me start coming down with something, I convince myself that my family will stay healthy! Sometimes it even works!

Now let’s get back to clothing. Following the birth of a child, every mother begins to obsess about clothing that would protect their offspring from getting too cold or too hot. For whatever reason, at the time I was mostly concerned with the former.

Given my lack of experience, I would ask my mother and grandmother for advice. They were always convinced that my child was too cold. As a corrective for that, I would dress him as warm as possible – a thick bubble of clothing that would make it difficult to even move. In winter, my eldest would always wear a sheepskin jacket, pants made from sheep wool, and a thick, warm sweater. It was truly reminiscent of the good-old-days when all of us would be wearing pants knitted by our grandmothers. From wool, no less! The pants were like magnets for snow, leaving kids to climb up steep hills with those snowman legs. Or how about sheep wool vests that were so itchy you felt like you had fleas! And let’s not even talk about wool scarves... What were those mothers thinking...

On second thought, it’s not all that mysterious – they were simply concerned. As was I when I would wrap my son in all that clothing. If only someone had told me how much of an overkill that was… Sheep wool is an excellent material, no doubt – it’s warm and natural, yet also heavy and itchy like no other.'

'I am no expert, so excuse my lack of knowledge in this area, but my experience with raising three children tells me that we do have a perfect type of garment, after all. One that’s natural, light, unrestrictive of movement, breathable, and warm like no other – I’m talking about clothing made from merino wool, of course.

It’s a shame I wasn’t aware of it at the time when my firstborn was still in kindergarten. I’m fully convinced that if I was, he would’ve gotten sick much less frequently. My daughter has been wearing merino wool clothing since nursery days, and my little pumpkin has been clad in it since birth.

I always found such phrases as 'pre-loved' or 'well looked-after' when it came to clothes. Why such powerful feelings for mere stuff in your possession? Yet now I can confidently tell you that I’ve fallen in love with clothing made from merino wool.

I’ve purchased a great number of merino wool garments from different manufacturers over the years and found them all excellent in terms of overall quality. When it comes to style, however, some manufacturers are much better than others. For this reason, I’ve recently switched to GREEN ROSE – the variety of colours and designs they have on offer is truly remarkable.

My oldest children have been wearing the same merino wool undershirt for a number of years now. It’s an excellent piece of clothing for kids that will ensure your children aren’t running around with cold sweat on their backs. Merino wool long sleeves are great at wicking sweat, so temperature variability and playing outside will no longer pose any threat.

Our littlest pumpkin is now fully covered in merino wool – from baby rompers to hats, scarves (what a perfect item!), sweaters, and all the rest.'

'Recently I was reaffirmed in my belief that merino wool clothing are garments of excellent. My daughter brought back a virus from school, which only gave her the sniffles, yet hit the little one much harder – a fever, ice-cold hands, and general malaise. My first instinct was to dress him in a thick cotton sweater (the logic being that thickness = warmth). I was dead wrong. My son’s hands remained every bit as cold as before.

And then I had an epiphany. After dressing him in a merino wool sweater, he warmed up, calmed down, and fell asleep in no time. Once the immune system kicked in and the fever did its job eradicating the virus, my son was back to normal in two days.

Another great example would be travelling in a car. All moms know how quickly children start to sweat in their safety seats. Add some direct sunlight to the mix and the situation goes from bad to worse. I can now say with confidence, however, that merino wool clothes is the best solution for travelling by car. Even if your child gets hot, his/her back will stay dry, as the moisture is quickly evaporated. This is very important because none of us want our sweaty kids to be caught by a cold gust of wind upon stepping out of the car.

My daughter – who’s in first grade now – goes to school wearing a merino wool blouse every day. The shirt is light and thin, yet warm, so there’s no great mystery as to why she’s so fond of it.

My son is almost a teenager now, so, naturally, looks are becoming an increasingly more important consideration. Up until recently, trying to convince him to wear a scarf was a futile endeavour. Sometimes he’d gripe that it’s simply too much work, while other times complaints would be directed at tightness and itchiness. Surely enough, he would constantly come back home with a bare neck and a sore throat. Then we bought a merino wool neck warmer. Instantly satisfied! It‘s super easy to put on, doesn‘t itch, and – just as importantly – looks stylish!

My upcoming purchases are already lined up: a nightgown for my daughter, pyjamas for the little one, as well as a pair of gloves and socks for both. And let’s also not forget something warm for mommy to keep her comfortable during strolls outside with a baby carriage! Upon noticing the price tag my husband shakes his head a little, yet knows that health and comfort always come first.

Please let us know in the comments which merino wool garments by GREEN ROSE you have already tried and why you liked them.